Old souls inherently understands that knowledge is power, wisdom is happiness and exploring deep is freedom. They tend to have a sensitive and spiritual ego seeking enlightenment.

The feelings that accompany being an old soul are usually a feeling of world wariness, watchful patience, mental tiredness, a detached calmness often perceived as aloof and cold. The old soul does not pursue things that can be easily taken away from them. They have little time and interest for the short-lived things with little meaning and no lasting fulfillment.

Old souls are frequently plagued with reminders of not only their own mortality but that of everything and everyone around them. This makes the old soul weary and at times withdrawn. Old souls tend to think a lot about everything. They have an ability to reflect and learn from their actions and those of others and this is the greatest teacher in their lives.
Posted by Unknown at 1:29 AM No comments:

What you see may not be what you 'Get'....Nethi Birakaya, so the title goes.

Over the years, seemingly obvious turned out to be surprisingly complex. After experiencing multitude of such eye openers, I have titled the blog 'Nethi Birakaya' which suggests something being there but a deep dive reveals none. So is stuff you come across in life. Excerpts of some such experiences I had so far:

1. Dawn; a daily occuring event. It is visibly a routine stuff, day breaks with Sun Rise. It is much later that I learnt and realized that it is the Earth that rotates and faces upto Sun a place at a time and Sun essentially is 'stationary' as far as earth is concerned. I have to consciously remind myself about this everytime I look around dawn and dusk and my admiration for Nicolai Copernicus grew that much for having figured it out with available tools and resources way back in his time. This intrigued me for years on how what seemed so apparent to all my senses is not so anymore !

2. Assasination of Mahatma Gandhi; A great leader that could inspire and lead 30 Million Indians in the days of no communication, distance and time challenges. An amazing inspiration. I was shocked and dismayed that the gentle looking Gandhiji was killed by a certain 'Godse' who I believed to be British, the enemy or a Muslim. As I grew up and started exploring, my perspective of the subject changed dramatically. Godse being Nathuram Godse a Chitpavan Brahmin and 'Veer' Vinayak Damodar Savarkar's follower, an ardent Hind Mahasabha member, a true patriot who dedicated his life, effort for Akhand Bharat. I became aware of how Narayan Apte, MadanLal Pahwa, Vishnu Karkare, Gopal Godse a 12 member team was frustrated with Gandhiji remaining silent when 1. India was vivisected and partitioned into India, Pakistan and East Pakistan. Gandhiji did not demonstrate or remonstrate but decidedly kept quiet. There were no protests. 2. Muslims were allowed to stay back in India if they desired so even when a separate country is formed for their living. 3. Gandhiji took up fast unto death forcing Indian government to release 50 Million pounds of Government money to Pakistan which is due to them but suspected as war chest by many Indian leaders. It is so rattling to have alternate theory on why Gandhiji is murdered. It is not about opposing British, it is for remaining passive when India was getting divided and forced to part with money used against it.
3. Nothing is as it seems...What you see may not be what you get...Godse - excessive meekness of Indian leaders Gandhi and Nehru who were anxious to
placate Muslims at all cost.Godse's refusal to tolerate that Hindus should be robbed to enable Muslims get more than their due simply because they are Muslims and would not other wise behave as loyal Indian citizens.Gandhiji earlier said 'vivisect me before you vivisect India' So long as  I live, I will never agree to the partition of India.
Narayan Apte messaged to Gandhiji - 'I denounce you 100 times because you have conceded Pakistan'. Nathuram Godse was furious 'My country Akhand Bharat Mata is torn into pieces, slaughtering of Hindus in Pakistan and the refugees crossing to India after parition, insisting on Rs.55 crore payment to Pakistan.'

3. Pledge; By rote we used to recite the pledge not truly knowing what it meant or what it represented. It amazes me on we kept on mumbling, jumbling our way and completed reciting pledge everyday and surprisingly none of the teachers took interest in explaining what it is, meaning of its rich words, sentences and their importance.  Only when I was an young adult, I could understand why it matters and what the contect meant. It was a pleasant surprise when I learnt that its Author is none other than Pydimarri Venkata Subba Rao a telugu. So the pledge is 'India is my country and all Indians are my brothers and sisters. I love my country and I am proud of its rich and varied heritage. I shall always strive to be worthy of it. I shall give respect to my parents, teachers and elders and treat everyone with courtesy. To my country and my people, I pledge my devotion. In their well being and prosperity alone, lies my happiness.' Such a noble thought from a true patriot.

Posted by Unknown at 8:02 PM No comments:

Hero with Thousand Faces...Survival of the fittest.

Our family for logical reason do not idolize folks like zealot fans. We appreciate and do like some people with whom we 'connect' but I cannot imagine a scenario where we go with a garland with a group to put it around whoever it might be -
a cinema hero or a political leader or such.

Every human - woman/man for that matter, is a hero/heroine with thousand faces/roles in her/his life time.
We are born little children, then young adults, adults, daughters, sons, wives, husbands, sisters, brothers, fathers, mothers, friends, members, colleagues, elders and so on and so forth. Many faces, many roles ----> one human.
I have read Joseph Campbell's works and realized during the time I could pause & reflect & think how we all made progress....in life form
from a small cell (you and Avinash being Biotech Engineers know more than me) From Embryo to full cycle of Dasha Avatar, an analogy of Embryo transformation to human.
from cell progression, a microscopic life form to the higher order of animals, so the journey had to be exciting...
---
1.Matsya - fish, the first class of vertebrates; Life/single cell organisms evolved in water; Invasion of land by fish;
Embryo swims in fluid as a fish, a fact is our vertibrae still represents closely  that of a fish which I read in a book 'Your Inner Fish - Neil Shubin'
2.Kurma - Tortoise, amphibious (living in both water and land),
Embryo starts developing limbs, organs that help live on land
3.Varaha - Boar, Mammal wild land-based animal
Embryo becomes a vertibrae, land dwelling animal, with respiratory systems, hands, legs for land based living
4.Narasimha - Lion/man, beings that are half-animal and half-human (indicative of emergence of human thoughts but Animal actions but getting powerful and wild in nature)
Embryo/Child develops fingers, nails like Narasimha and gets active
5.Vamana - short, premature human beings, hominids
Child grows and takes human form
6.Parasurama - Full grown human with powers to survive in the world and remove obstacles he faces taking them head on
Child is delivered, new life to mother
7.Rama - humans living in community, beginning of civil society, setting up life standards, rules, family, relationships
Child learns to live in society, marries
8.Krishna - humans practicing animal husbandry, politically advanced societies, strategies, groups
Child grows up to middle age, life-leading strategies, life-saving wars
9.Buddha - humans finding enlightenment
Old age, inner looking, welfare of not only self, but all
10.Kalki - death and its great powers of destruction and so the cycle begins...
Full circle, from tomb of the womb to the womb of the tomb, we come and go!! At the time of birth, only guaranteed
thing is death, as life once born is like a released arrow shooting towards death - it can never be turned back.
----
There is a programmme in Bhakti TV ' Andhra Mahabharatam' by Garikapati Narasimha Rao (you can watch few episodes
on YouTube). So it starts with a cinema song(from the film Kurukshetra - Hero Krishna, Sobhan Babu..). The song
brilliantly relates Mahabharatam/Kurukshethra war to human's life struggles/war. It goes like this
Manava(Human) Jeevithame Oka MahaBharatam, Adhi Manchi Chedula Renti Naduma Nithya Garshanam, Narulunde Ila Sadanam(Earth) Kurukshethrama,
Ika Jaruguthundhi Anu Kshanam Dharma Yuddhame'....But like warrior Arjuna did before Bhagavad Gita preaching and
counselling by Lord Krishna, we do not have a choice to refuse to go on with it...
Anivaryam(Must and should) Yuddham, Sara(Arrow) Sandhaname(Aim and Shoot in life) Dharmam....!!

The battlefield is symbolic of the field of life, where everyone strives to live by survival of the fittest.
Each of us is a Hero with Thousand Faces.

Kirti Mukha....Understanding Life and its Paradoxes.

Paradox—example; One loves being in the public eye but also deeply values and protects one's privacy.

Since childhood, I have been visiting temples and offering my prayers to the deity. With some effort, one reaches sanctum santorum eager to have darshan of the presiding deity. As we close in we focus to our maximum on the deity offering prayers and sharing our 'requests' for a boon from the deity as we are 'limited' by our powers and capabilities in facing the challenge. We are seeking additional multiplying 'forces' as we are humans with limited capabilities. Imagine, that it took so much effort to just land on a small satellite 'moon' which is the only other place in this it is vast universe that a human could land. So difficult to understand existence of universe and our place/role in it. Getting back to sanctum sanctorum/garbha gudi - every god/goddess is covered with a 'thoranam'/ arch in every temple and in the middle of it right above the deity one will find a demonic face. I used to be taken back and worried looking at it and did not/could not understand why this evil looking face/object/guy is looking at you 'hungrily' when you are trying to focus on the God/Goddess to seek blessings for a better than yesterday life..!! Now after so many years I had the time and little understanding why this face Kirti Mukha' a nice name denoting Glory Face or face of glory is kept as arch/thoranam in every temple above deity but with frightening look. This is kept as a 'reflection'/mirror of human thought and reminds every devotee for a moment 'Every human desire feeds on the desiring human, relentlessly, continuously, forever'. The story of Kirti Mukha is - he is created by Lord Shiva to kill another demon/yaksha. After killing the demon, Kirti Mukha who was not called such till then turned to Shiva and asked him that his hunger is not satisfied and who next to kill and eat? Lord Shiva had no other in mind so he asked the created demon to eat himself. So the demon started eating himself until he is left with nothing else than his face(desire). Shiva was pleased that he carried out instructions to the hilt named him Kirti Mukha or face of glory and granted him the wish to be on arch of every God/Goddess as a reminder of the human desire eating life itself but sustaining.. 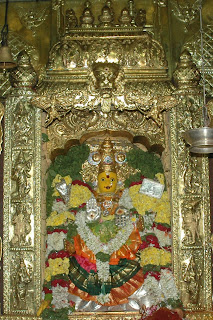 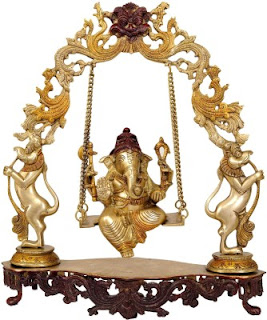